Since April, Post-Soviet Trans* Coalition has been monitoring and documenting cases of violations of the trans people rights. This work is part of the general COVID-19 pandemic response project in Central Asia and Eastern Europe. Cases are documented for the period not necessarily from the beginning of April, but from the introduction of the quarantine measures by states, which can be considered a starting point for changes in social reality in the respective states for their citizens, including trans* people.

For the purposes of documenting, a questionnaire was developed, which the sufferers themselves fill out on conditions of anonymity and confidentiality, while having the opportunity to describe the incident in all the details they consider relevant. In some cases, when it was not possible to contact the sufferers themselves, the information was taken from various other sources, including the survey of the trans* people needs in the situation of the COVID-19 pandemic, conducted by the Trans* Coalition earlier, as well as media publications and social media posts.

When analyzing the responses, several entries were excluded because they do not belong to the respective period or actually do not describe any incidents. Apart from this, 28 cases of violence, discrimination and other violations of the trans* people rights have been documented to date (beginning of June). Let’s look at them in the context of various indicators.

The distribution by gender identity looks like this (non-binary persons are an umbrella category here that includes any identities differ from male and female). 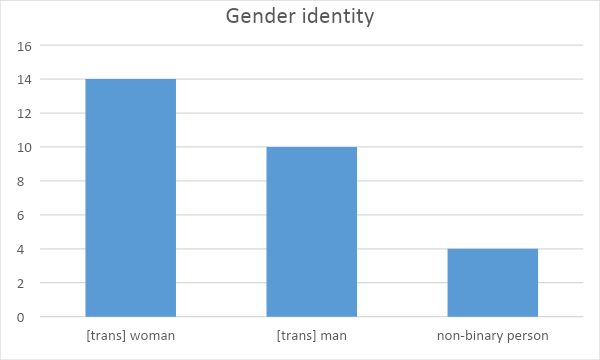 As can be seen from this graph, trans* women suffer more often than others. 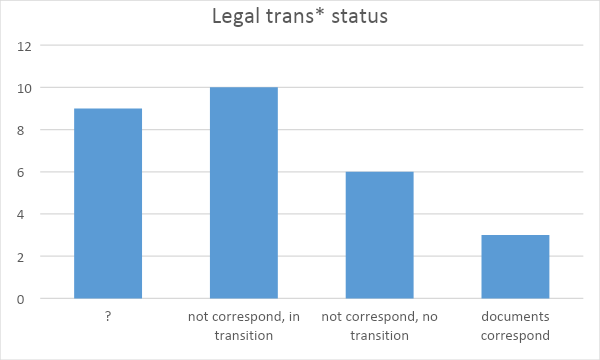 Also, 16 people have ID documents that do not correspond to their gender identity, and only 3 people have obtained legal gender recognition. There is no information about legal trans* status for 9 persons. These data confirm that non-correspondence of ID documents significantly increases the risk of becoming a victim of rights violation.

The distribution by country is as follows: 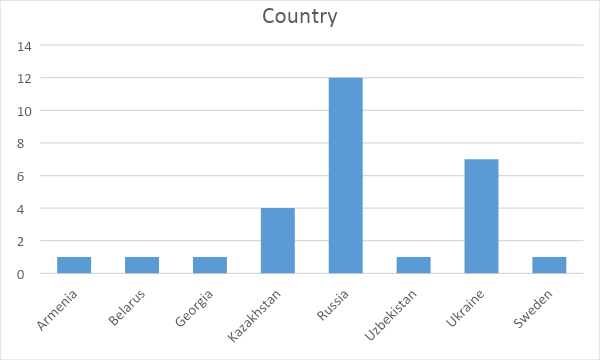 Sweden was also included in this list, since one of the cases describes a migrant there from a post-Soviet country. The predominance of cases from Russia and Ukraine suggests rather that a monitoring in these countries is better managed to date than that the situation of trans* people rights in other countries is really better. 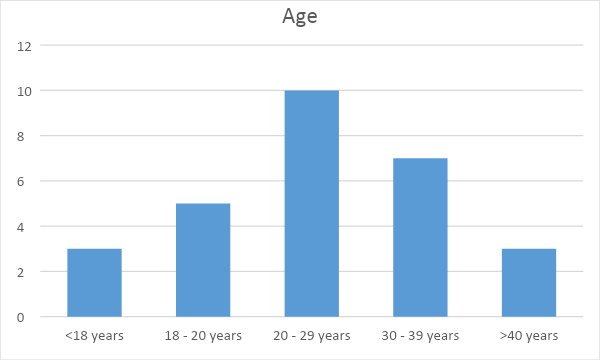 There are only few older people there. The question remains open whether they really suffer less from violations of rights, or whether this category is just more closed and less visible.

In 9 cases, i.e. about a third of the total number, the sufferers are more or less involved in activism. Moreover, there is no accurate data on this for some other cases. This figure looks quite high, and it may indicate that activists are more at risk of transphobic incidents. But it is worth considering that they are also more tend not to be silent about such incidents, which then become available for documentation more often.

Now let’s move to the analysis of the cases of rights violations themselves. 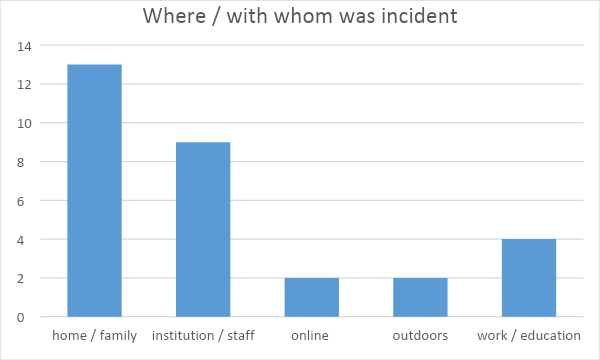 Almost half of the incidents (13) occurred at home with partners, family members, etc. An indirect reason for such a large number could be that due to quarantine, many trans* people were locked at home with their families, and if the relatives are transphobic, then conflicts only worsen in such a situation. In second place (9) are incidents in state or other institutions, organizations or with their employees, more than half of which (5) are actually incidents with the police.

Relatively small documented number of incidents at the workplace could be due to the fact that the quarantine largely equated trans* people with others in this: situations of losing a job for reasons not related to trans* status were not considered here. It can also be assumed that there are only few online incidents reported because people may not perceive them as something worth reporting.

Note that the total amount for this classification exceeds the total number of documented incidents (28), since some of them go into two categories at once. 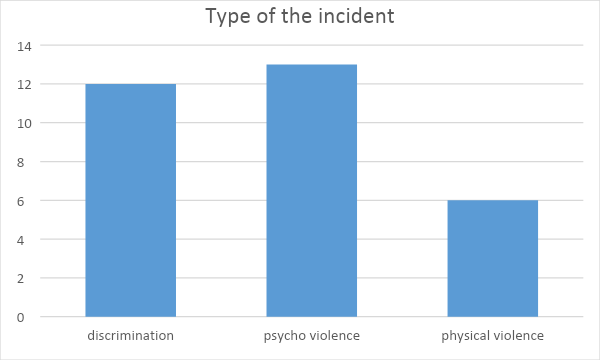 Incidents are divided into three types here. To simplify, we consider that a stronger type absorbs a weaker one (both physical violence and discrimination are most often accompanied by psychological one), except for two cases in which one situation actually involves two different incidents.

Psychological violence is associated with rejection of the gender identity of a trans* person in most cases. It takes the form of misgendering, deadnaming, sometimes even more pressure to force person to behave in accordance with the assigned gender. It mostly came from parents or other family members and relatives.

Half of the discrimination cases are unlawful police actions: unreasonable detention or arrest, inappropriate behavior of police officers and, in one case, blackmail and extortion. There are also cases related to employment (dismissal or denial of legal employment), improper bank services due to trans* status, etc.

Physical violence in some cases also was done by relavties, when in their rejection of trans identity they resorted to beatings. In another case, in Tbilisi, Georgia, a trans* activist set herself on fire in front of the city hall, thus expressing protest against the inaction of the authorities, who do nothing to help trans* people in their difficult situation during the epidemic. The reaction to her action, however, was the detention of her by police.

Two cases of particularly brutal violence occurred in Ukraine in late April. In first of them, in Zhytomyr, a transgender girl had been beaten and raped for several hours. In second, in Kharkiv, a trans* girl was beaten and her nose was broken, so she spent several days in the hospital. Both these cases were widely spread among human rights activists network and in the media. In both, the police started an investigation, but the motive of hatred on the ground of gender identity was not taken into account.

Regarding contacting the police or other authorities after the incident, there were 9 cases, including the two described above. In one of the cases, the police did not react in any way; in another, the claim was withdrawn because the sufferer changed their mind. Also, in the case of a denial of bank service, the issue was finally resolved, but a complaint was lodged about the bank’s employees. In other cases, the investigation or proceedings are still ongoing.

Finally, some of the respondents, in addition to describing their case, left comments they wanted to share. Some of them are quoted here (personal information is removed):

“There are many homophobic and transphobic communities arose on the Internet calling for overt violence and presenting LGBT people as “disgusting and worthless”. In these communities, there are direct insults and threats, I even saw calls for murder. Communities like Homophobic Wolf, Homophobic Bear, and Against LGBT People often call for violence”.

“I dream that it would be easier for us to pass a commission and for a simplification of documents change for us, for voice surgery to be doing in Russia, not only in Moscow but also in other cities, for that there would be specialists on changing sex via vaginoplasty. And most importantly, for our LGBT community in Russia to help transgender people in a difficult life situations”.

“…in our work, we have faced with the inability to conduct our rare events (such as peer-to-peer consultations, meetings with experts, etc.) in person, and there is not enough equipment and material support to conduct them remotely. It is also worth noting that there are practically no initiatives to help trans* people during the quarantine”.

“I’m wasting time, you are just filling up the statistics”.

“I am very grateful to the trans community … If I’ll have all this. I will be strong. And I will help a transgender people like me”.

“It was very important that they helped me. I would like to cooperate if I can be useful”.

“Thank you. [Psychologist] pulled me out from the darkest day and helped me to live”.

Meantime, quarantine becomes less restrictive in most post-Soviet countries, but the consequences of the epidemic and related measures are likely to be felt for a long time on. So the collection of information on cases of violations of the trans people rights continues. If such an incident has occurred with you, please fill out the form here. If you are aware of such cases with other people, please send the link to the form to them or contact me by mail or on Facebook if possible.